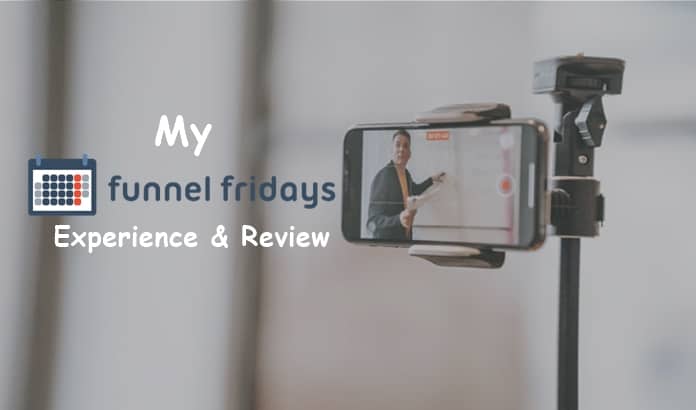 I’ve ignored the ClickFunnels Funnel Fridays weekly shows over the years it has existed.

I began attending the weekly show. Because I wanted to learn more about funnels.

And the most tempting part of it?

Grab and have access to the FREE funnel templates Jim and Russell give out towards the end of every Funnel Fridays episode.

Finally, you’ll also get to grab over 11+ premium funnel templates I downloaded from these Funnel Fridays show into my ClickFunnels account.

I’ve been using them freely in my business and as a lead magnet.

What Is Funnel Fridays?

Funnel Fridays is a free weekly show held every Friday where Russell Brunson (The Funnel Expert) and Jim Edwards (The Copy Expert) build out high-converting online marketing funnels and create the funnel copy from scratch in 60 minutes or less, LIVE.

Then at the end, they’ll give you access to 7 customized funnels created by ClickFunnels’ top funnels designers.

You also get to see some behind the scenes strategies on what makes funnels covert, watch, and apply them to your online business.

And in just less than 60 minutes Russell Brunson and Jim Edwards would build niche-specific funnel AND write the copy for these funnels.

Who are the hosts of the weekly Funnel Fridays? 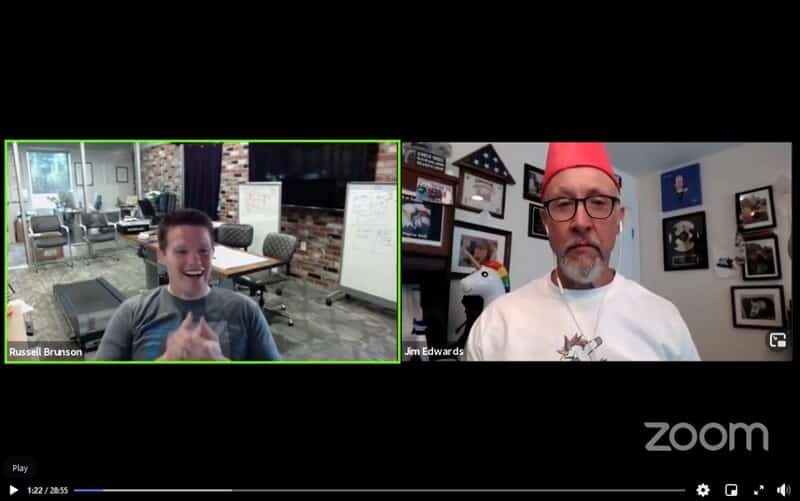 Here’s a brief bio of the two awesome hosts behind the Funnel Fridays show.

Well, if you came here to know more about what Funnel Fridays is all about then I think you’d already know one or two things about the man that popularized the concept of a sales funnel.

The myth. The legend. Russell Brunson.

Over the past 19 years, Russell has built a following of over a million entrepreneurs. I’m one of those!

Russell Brunson has sold hundreds of thousands of copies of his books (making him a New York Times Bestselling Author) and co-founded the software company called ClickFunnels.

That helps tens of thousands of entrepreneurs quickly get their message out to the world.

He is known to be the master of sales funnels, perfect webinars, and the highest-paid stage speaker who made over $3million dollars in less than 90 minutes on stage.

He gets on with his co-host on every Funnel Fridays episode to build out cool funnels for the funnel hacker community.

On the other end is Jim Edwards.

A renowned copywriter and online marketing expert who has been marketing since way back in the ’90s.

Jim is the author of one of my favorite copywriting and sales funnel books – Copywriting Secrets.

A book I can’t recommend enough for anyone who wants to improve their marketing copy and copywriting skills. Golden.

And takes care of your marketing copy challenges.

Jim Edwards is the one responsible for providing you with all the custom funnel scripts to create all the copy used during the Funnel Fridays.

If you’ve tried building funnels for your business recently or in the past, then you should have an idea of how daunting it could be.

Despite the fact I’ve been a user of ClickFunnels for over a year and built over a dozen of funnels with it – I still find it a bit difficult sometimes.

It was after going through 3 episodes of Funnel Fridays I got a few tricks on how to make my life easier with funnels.

Not as complicated I thought it was.

Russell Brunson just makes it easy using ClickFunnels in building funnels. So, that even a dummy can create simple funnels.

While Jim Edwards – the copywriting wizard – made writing funnel copies so flawless and seamless.

With the help of Funnels Scripts of course.

The second part I love about the Funnel Fridays show is how engaging, motivating, and supporting it is.

You get to interact with other funnel hackers during the live Zoom meeting/call.

The energy that flows is contagious I must confess.

There is also ClickFunnels support on standby that answers the attendee’s questions.

Finally, the most honeyed part of it…

Is the FREE funnel templates and custom funnel scripts given to us at the end of every Funnel Fridays episode.

To gain inspiration from, customize as you like, give out or even sell it for a fee.

Who is Funnel Fridays for?

If you sell or have plans to sell any type of products or services online – then Funnel Fridays would be a great marketing show for you and your business.

From the Funnel Fridays page, here are the type of funnels they claim to cover:

Maybe you don’t know, Funnel Friday’s show has been in existence since 2017.

This means I missed hundreds of episodes before I started attending.

Below is are the episodes I’ve attended so far with the funnel type and templates covered:

During this episode, Russell and Jim shared why VSL funnels work and how you can build and launch one for your online business in record time.

Here is why VSL Funnels can help you:

If you’ve ever wanted to know exactly what your audience is thinking, and what they want so that you can SELL them the EXACT thing that will solve their problem and have them LOVE you for it…

Then the Survey funnel can turn your whole business around.

You no longer need to guess what your audience wants or needs to satisfy their thirst.

That’s what the Survey funnels do for you.

With the Survey Funnels you’d be able to:

With cart funnels, you’ll be able to sell any type of physical product online.

With the help of Cart funnels, you can: Product Launch funnels are funnels designed to help you launch your brand new product to your target market. With a product launch funnel, you’ll be able to build your list of potential buyers for an upcoming launch.

To generate sales in record time.

Also, with this type of funnel you can:

With Auto webinar or evergreen funnels – you put your high converting webinar on autopilot so you can sit back and watch the sales roll in.

Furthermore, this type of funnel helps you:

Get paid while you sleep…so you never have to babysit your sales funnel ever again.

Build a targeted list of your ideal prospects and customers using this simple “set it and forget it” strategy (grow and scale your tribe in record time).

Make the ‘World Clock’ work for YOU by letting viewers watch your webinar whenever THEY want…no matter where in the world they live or time of day.

Use your auto-webinar to build your authority so you become the go-to expert in your market.

Deliver the perfect presentation to sell your products or services ON DEMAND…where your salesperson never calls in sick or asks for a raise.

Tripwire marketing funnels let you quickly qualify leads into paying customers right from the start – without using a free lead magnet or wasting a fortune in ads.

Here are other benefits of Tripwire funnels:

Invisible funnels allow you to sell your products or services without selling’ by getting your customers results in advance. And avoid coming off as pushy, salesy, or sleazy.

With an Invisible Funnel, you can:

Hope you learned everything you desire to know about the Funnel Friday show?

One final thing I’d like you to know is that there are no replays. This is what I don’t like about it. Only those who register will get the exclusive link to login and watch. After that, it’s gone.

To access free funnel templates, you have to make use of the secret password shared towards the end of the show.

Register right here to get notified for the next Funnel Fridays episode.

I am an independent ClickFunnels Affiliate, not an employee. I receive referral payments from ClickFunnels. The opinions expressed here are my own and are not official statements of ClickFunnels or its parent company, Etison LLC.